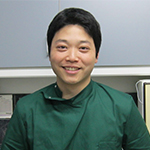 Takeshi Okano BVetMed MRCVS
Takeshi spent his childhood in Japan before moving to Belgium where he graduated from the University of Ghent in 2006. He has worked mostly in the UK as a small animal veterinary surgeon. He worked in Kent at a mixed animal practice and at several small animal practices as a locum before he joined Ashley Vets in November 2015. He has an interest in all aspects of surgery, orthopaedics and diagnostic imaging. In his spare time, he enjoy swimming, scuba diving and playing football. He also has a Staffie/Rottweiler cross called Riki so you may see him walking with him at Elm Grove recreation ground. 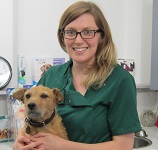 Joanna Rossiter BVetMed MRCVS
Jo grew up on a farm in Dorset surrounded by cows, horses, goats, sheep, chickens, dogs, cats, guinea pigs and rabbits so it was an inevitable decision for her to become a vet! She qualified in 2012 from the Royal Veterinary College in London and moved back to Dorset for a year to work as a mixed vet. Jo then left Dorset to focus on small animal practice and has been locuming around the country since then. Jo joined us as a locum vet in March 2016 but loves it here so much has decided to stay on permanently! She has a special interest in geriatric cats and diagnostic imaging. In her spare time Jo enjoys running and travels back to Dorset regularly to help out on her family farm. 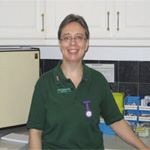 Ann Jackson RVN
Ann started at Ashley Vets in 1983 and qualified as a veterinary nurse in 1987. She is a Pet Insurance Advisor and Veterinary Health Advisor. Ann is at the moment studying ‘Feline Behavior & Psychology’ and is half way through her course. She handles insurance claims and runs weight clinics for our slightly larger pets. Ann has a black cat called ‘Button Lavender’ who has featured in the ‘Your Cat’ magazine and a collection of tropical fish and is a keen ornithologist. She also enjoys reading and gardening. 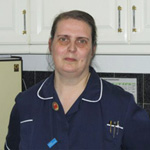 Meryl Smith – Animal Nurse
Meryl started at Ashley Vets in 1984, she is a pet insurance advisor and a veterinary health advisor. She also spends 2 days a week at our Walton Road branch. Meryl has a German shepherd called Djusti and a collection of tropical and cold water fish. Meryl spends her time walking Djusti and has a large collection of Steiff bears. 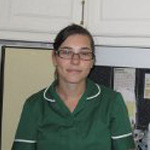 Laura Hewitt – Animal Nurse
Laura has always loved animals and after leaving school in 2004 she enrolled at a college and undertook a two year course in Animal Management and Welfare. She then came down to Surrey, reluctantly leaving her cats and dog at home in Shropshire. She worked for a large pet shop and was trained in various aspects of nutrition and animal husbandry. She joined the team at Ashley Vets in 2013 and she hopes to own a new cat very soon. 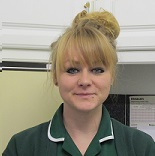 Tara Mason – Animal Nurse
Tara joined us in October 2013, having worked previously at a local boarding kennels and cattery. One of our patients, who has boarded at that kennels, was clearly delighted by her move to Ashley Vets, and when this little dog recognised her at the reception desk he greeted her like a long lost friend! Tara has a First Diploma in Animal Care, and an Extended Diploma in Animal Management, which she achieved at Berkshire College of Agriculture. She has several animals of her own, including 3 dogs, 3 cats, tropical fish, a pygmy hedgehog and a little mouse that no-one wanted. 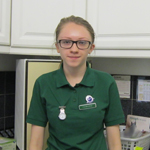 Charlotte Kelly – Animal Nurse
Charlotte started working at Ashley Vets in March 2015. Charlotte has always wanted to work with animals and has always had pets including cats, hamsters and fish. She regularly helps her Nan out by walking her Irish Setter which she really love doing. 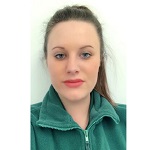 Jasmine Hunter – Animal Nurse
Jasmine joined us in May 2017. She studied level 2 Animal Management between 2013-2014 at Merrist Wood College in Guildford. Jasmine has also done voluntary work helping out in a cattery, kennels and a veterinary practice. Jasmine has always had pets since she was a young girl but now has her hands full with 3 dogs, one of these being a rescue and 2 cats.